Purpose of the research

The primary purpose of the research was to investigate the nature of engagement between issuers and investors, and the extent to which it had changed in the last five years — whether in its frequency, the form it takes, the organisations and individuals involved or the subjects being discussed. We also hoped to identify what factors had contributed to any changes.

In the last decade or so, policy-makers in many jurisdictions have taken actions that have been intended to stimulate engagement between issuers and their shareholders. The secondary purpose of the research was to see whether there was evidence that these actions had achieved their objectives.

The main component of the research was a survey of company secretaries or equivalent corporate representatives in listed companies in ten different markets (Australia; Brazil; Chile; Italy; Japan; Hong Kong (China); South Africa; Sweden; United Kingdom; and United States) and across eight business sectors. The markets and sectors selected represent different regions, levels of development, regulatory frameworks and company ownership structures. From the selection of 742 listed companies invited to participate in the research, including large and small firms, 116 responded to the survey.

After the survey was completed, we interviewed selected respondents to gain a more in-depth understanding of their experience of engagement. We also interviewed some institutional investors operating across different regions to see whether the survey findings matched their own experience.

The quantity of engagement

There is clear evidence that the quantity of engagement has increased in the last five years, and that this is true for companies of all sizes and in both developed and emerging markets. In total, over 60 percent of respondents reported increased engagement, with only a handful reporting that it had reduced. The majority of respondents also reported that they devote more resources to engagement than in the past.

The responses to the survey suggest that the specific engagements are initiated fairly equally by issuers and investors in most markets. When issuers initiate engagement, they most frequently target investors with the largest current or potential holdings in the company and those they believe might take a hostile position; while for investors the main considerations are the value of their investment and whether they have concerns about the performance or governance of the company.

The nature and quality of engagement

Over 70 per cent of issuers responding to the survey considered that the quality of their engagement with investors had improved to some extent compared to five years before. While the majority of engagement is still ‘event-driven’, taking place in advance of the general meeting or around the publication of financial results, there is some evidence that engagement is becoming more of an ongoing process, at least in more developed markets. This is reflected in the reported increased use of emails and face-to-face meetings as methods of engagement.

Issuers reported that the CEO, the CFO, the IR department and the chair were most frequently involved in engagement, as they had been five years before. Many issuers reported that, on the investor side, ESG teams had emerged during that period as a third point of contact alongside fund managers and analysts. Some raised concerns that this made engagement more complicated, as it was not always clear who would be making the investment or voting decision for the investor.

In terms of the issues addressed through engagement, the survey results suggest that, while the most frequently discussed issues — performance, strategy, capital structure, M&A activity and leadership — have not changed, there are more issues on the agenda than was the case five years before. Issuers in all markets reported an increase in discussions with investors on the impact of technological change, while ESG issues are now much more prominent in developed markets.

Reasons for the change in the quantity and quality of engagement

When asked what factors they considered had been responsible for the increase in engagement, one third of large issuers and issuers in developed markets pointed to international trends, which may reflect the nature of their ownership base.

Less than 20 per cent of issuers that responded to the survey identified regulatory change or political pressure as a reason for changes in the quantity or nature of engagement. This suggests that many of the policy interventions of recent years are not perceived by issuers to have had a direct effect. In the interviews, however, some issuers stated that these interventions may have had an indirect impact by acting as a catalyst for change.

A similar view was expressed by the investors we interviewed. The majority stated that they had increased their own engagement primarily because of greater client demand for more active oversight and, in some cases, more focus on ESG factors; but also acknowledged that some interventions had indirectly contributed. Stewardship codes, for example, were broadly welcomed, but seen as a means of raising awareness rather than changing behaviour.

A number of issuers and investors expressed concerns that interventions might not always be responded to in the way that policy-makers hoped; if they created a compliance or box-ticking mind-set in issuers, investors and advisors, this could create more problems than it solved. It was suggested by some investors that it might be more productive for policy-makers to focus on removing barriers to engagement so that those issuers and investors that want to engage can do so more effectively, rather than trying to get those that do not wish to increase their levels of engagement to do so. 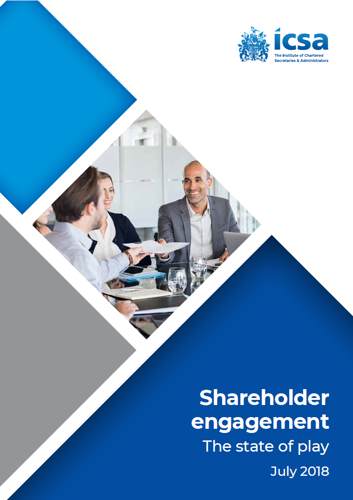