In 2017, ICSA: The Governance Institute initiated a thought-leadership series to explore key governance issues and consider how to address them.

As part of that project, this research sought to understand how different age demographics within our community view the future of governance.

Millennials (sometimes called generation Y and generally defined as those born between 1981- 1996)1 are expected to make up roughly 75% of the global workforce by 2025.

They have frequently been stereotyped as the ‘entitled generation’ who believe they can have and do anything.
This has been seen as both a positive and negative trait – a source of ambition and drive that has led to new ways of thinking and working, as well as the cause of disappointment and restlessness.

What impact might this have on governance trends in the next 10-15 years?

Over 400 company secretaries and governance professionals contributed to our survey, answering questions on the role of governance and future challenges facing organisations and the profession.

The survey allowed us to compare the answers of millennial and generation Z respondents (aged 18-35 and referred to in this research as 'generation Y/Z') with respondents aged 56-65 (termed 'established practitioners' in the report).

Although we recognise that generation Z (born in or after 1997) can be differentiated from millennials in various ways,5 we have combined the two groups due to the smaller number of generation Z responses received, and the lack of significant variation in the views expressed by the two groups throughout the survey.

Members of generation X – born between the mid-1960s and early 1980s, just before millennials – are likely to be leading many organisations in the next decade. Their views were also sought, and are included in the results that show the combined responses from all age groups (referred to as ‘all respondents’ in the report).

However, we chose not to focus on them as a separate cohort to enable us to concentrate on where differences in perspectives were more markedWe are extremely grateful to everyone whose participation made this project possible. 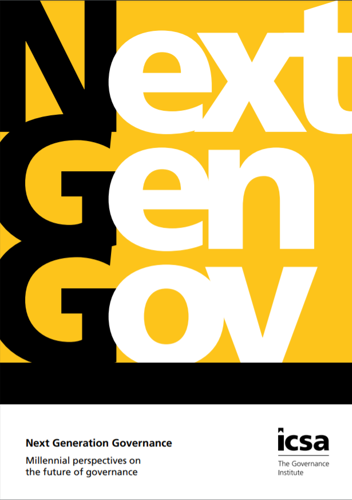