Sport plays an important role in society and in the economy. Clubs, organisations and the staff and volunteers who run them make the benefits of sport available to millions.

However, a series of high-profile failures, often attributed to shortcomings in governance, have been experienced by international sports federations, domestic national governing bodies (NGBs) and individual clubs in recent years. These have had a negative impact not only on the organisations themselves, but on their disciplines more widely and on sport in general. In some instances the actions have extended to criminal wrongdoing. The outcomes have ranged from serious reputational damage, threats to sporting integrity, third party investigations and legal proceedings to, in the worst cases, very real and grave suffering on a human level.

At the time of writing, the publicly-funded sports sector in the UK is embedding the mandatory Code for Sports Governance and equivalent measures in the separate jurisdictions. Whilst steps to improve governance processes are to be welcomed, there is a growing recognition that rules-based compliance cannot on its own deliver healthy behaviour within organisations. Indeed, the efficacy of rules and processes depends in large part on the integrity of those subject to them: their usefulness is negated if there is a mindset of bypassing them. Across all sectors there is an awareness that behaviour is determined to a significant degree by the culture of the entity concerned.

Despite this, there remains a sense that the relationship between governance and organisational culture is still not fully recognised and that too much emphasis is placed on the mechanics of governance – its policies and procedures – with too little on dynamics, attitudes and behaviour which are interwoven with them. 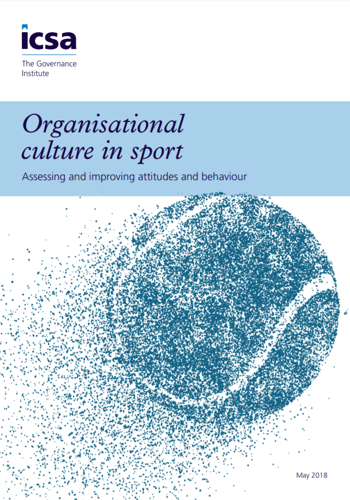